Kota got to stamp its success far and wide on Sunday, with the top three students who cleared the IIT entrance having been coached at the Jaipur and Chandigarh centres of an institute from the Rajasthan town. 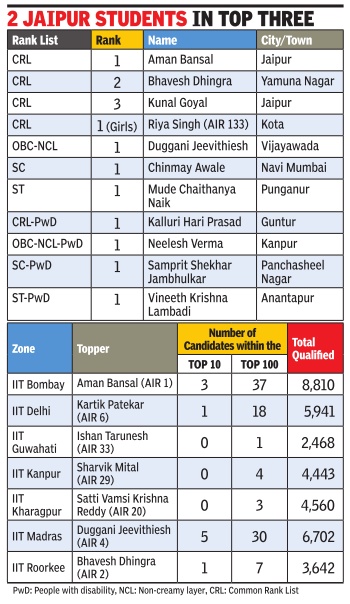 Bansal, who scored 320 marks out of 372, is the first topper from Jaipur in the past five decades. “I wasn't sure but my institute kept assuring me of my rank,“ said Bansal, the son of an engineer working with the government. Aman wants to study computer science at IIT-Bombay . “My dream is to make education-related software and mobile apps so that children do not have to drop out due to poor learning,“ he said. Dhingra said the credit for his achievement went to god, his parents and teachers.

IIT-Chennai zone had five candidates in top 10; Mumbai had three; and IIT-Delhi and IIT-Roorkee zones had one candidate each among the top 10 candidates. In the academic year 2016-17, four new IITs, in Chhattisgarh, Goa, Jammu & Kashmir and Karnataka will start operations.

Of the 1,47,678 students who took the highly competitive test that decides admissions to the IITs and other top engineering colleges, 36,566, including 4,570 girls, were declared successful on Sunday .